Have you ever just had one of those days that goes from a great night's sleep to complete crap in 3.9 seconds? Well here is the story of mine and how I turned it around.

I woke up on a Friday morning, actually feeling like a got a goods nights sleep. Showered, got ready, made my lunch, headed out the door and everything was fine. I was actually thinking good thoughts, after all it was Friday and it was also a payday and I knew I was going out to dinner with the hubby later that night. Well all my good thoughts changed once I got into the car.

I didn't get into any accidents, but that would have just been the cherry on top. I admittedly was a tad later than I wanted to be leaving the house, and pulling out of my driveway almost got hit by a car speeding through the residential neighborhood without his lights on and I never saw him, strike one.

Coming up to the highway from my house it is a traffic light, and it had just started to turn red. I was taking a right onto the highway, it was that two seconds where everyway was still red, so I went for it to get out fast enough. Well apparently the giant, oversized truck that was waiting for his green didn't like that I was in front of him. He took off from the intersection and was literally two inches off of my bumper for at least half a mile, trying to be intimidating to me. There was no place to go, I was already in the right lane, but he did not want to move over to pass me, he decided to just stay on my bumper. He was so close I could no longer see his headlights. So I may have thought I saw a squirrel or a deer or something on the side of the road and touched my brake lights. Holy cow did he not like that! He almost took off my back bumper to pull up next to me, flip me off and I am sure had a few choice words too. I smiled and waved to him, strike two.

Already running late, and now going exactly the speed limit because I didn't want to meet up with the truck at another stop light, I proceeded on to work. Turning down the side road that is the quickest route to my school, what do I face, a train. Seriously, I have been working at this school for three years now and this is only the second time there has been a train on my way in, strike three, I'm out and officially late to work.

Not that anything terribly bad happened to me, but it seemed like an omen for the rest of my day, and I did not want to have a bad day today. Getting out of the car and walking into work, I just kept thinking about how to change it around. We have two sets of doors leading into the school, I walked through the first set and the nicest 6th grader came racing over to open the door of the second set for me. He was at the opposite end of the entryway, he came all the way over just to open my door! I immediately thanked him and told him that that was the best thing that had happened to me so far today. He probably just thought I was some weird old person, but he really changed the trajectory of my day.

It got better from there too, due to it being a payday my work did a payday treats for breakfast event and treated the whole staff to a pancake breakfast with all the trimmings! I seriously was craving orange juice since I woke up, and they had orange juice! My day had changed. But now that I was in a better mood, what do I do to give that good karma back to the world? I looked for ways to give back.

I started off by thanking every person that helped to put on the pancake breakfast, complimented them on how delicious everything was and how it was a great start to the day.

I make copies in the office for the teachers, so I used the die cut machine and leftover scrap paper to make fun shapes and write a "Hope you are having an awesome day" message on them and attached them to each pile of copies. These then get delivered by kids at lunch time to the teachers and the kids loved it too.

I wrote a post-it note inside of the women's bathroom door stating, "Just want you to know how important you are to this school" and left it there all day. It was kind of fun hearing the whisperings from the other women wondering who did it.

I now have laminated signs of happiness and kindness that will be replaced each week on my door. It was actually really fun looking for inspirational quotes that looked pretty on Pinterest.

I smiled at everyone that looked liked they were sad, teachers, kids and even a few parents.

Dinner that night was amazing also. Just the hubby and I went out to dinner, technically we were working as we were doing a secret shop of the restaurant, so our meal was free and it was in the rules of the shop that we had to order an alcoholic beverage, darn. I wanted to keep the good karma up, and left the waitress a huge tip so that hopefully it would make the end of her day better also. 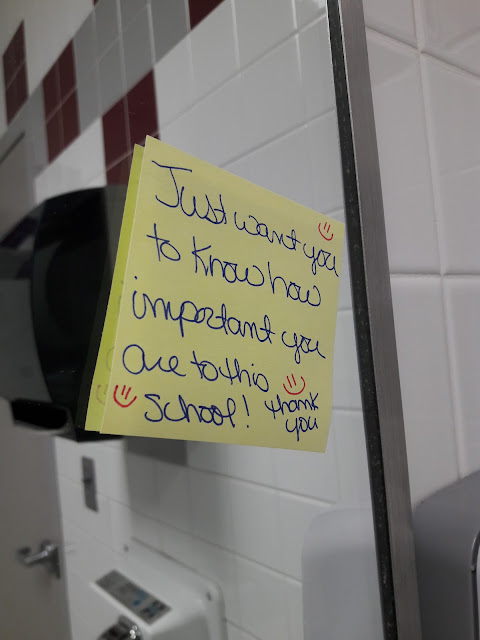 What do you do when you are having a bad day? How do you try to change it around, and does it work? Let me know in the comments, so when this happens again I have more ideas to run with.
Email ThisBlogThis!Share to TwitterShare to FacebookShare to Pinterest
Labels: Humor, My Life