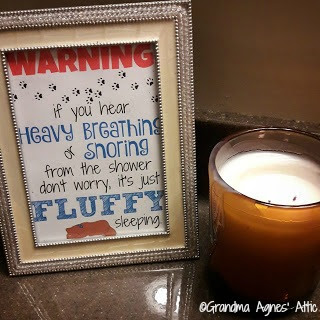 We just finished up our bathroom remodel a few weeks ago and I am still madly in love with the room. My daughter was planning on having a large group of her friends over for a party and I noticed one additional piece of decoration that I thought needed to be added to the bathroom.

Now you see, we are a three dog family. Crazy, I know. But one of our dogs, Fluffy, is going on 14 years old now and is starting to act in different ways that she has in the past. Example, she now enjoys sleeping in the bathroom shower, a lot. I think it may be because it is cooler on her fur, she is alone and nobody bugs her, or maybe she likes the echo sounds. Either way, she ended up sleeping in the shower at least once during her day.

With all these kids coming over I felt a small sign placed on the sink would be appropriate, because I have been "using the facilities" more than once and have been startled to hear snoring coming from behind the shower curtain. For our family, we already know it's just Fluffy, but could you imagine if you were a guest and suddenly when you are at your most vulnerable, you hear noises from behind the shower curtain? Visions of reverse Psycho tend to come to mind.

So just a few hours before all her friends were coming over, I went to my favorite picture editing site PicMonkey. This site does more than just edit pictures, you are able to create small works of art like my little sign. I started by signing in, I have been a paid member for over five years now, then hitting the Design button. From here you are able to pick your size, use one of their templates or start with a blank canvas. I normally pick my size knowing that I can crop it to what I actually want later. Then it is just time to play. I try out different fonts and sizes and play with the colors until I find exactly what appeals to my eye. I did pull in my own clip art that I found online. If you do this, be sure to use clip art that is not copyrighted and has a transparent background. I found a little dog sleeping that I liked and it needed something along the bottom of the picture to add some detail. Play around with the sizes and angles until you find just the right spot.

Basic design skills can also make or break something like this project. I used the same color blue in three places, with the words 'heavy breathing & snoring' the word 'Fluffy' and I matched those to the collar on the dog. Red was used only once to convey attention and the dogs brown coat was used only once also. Using eye catching items like colors should be used in uneven groups, preferably in threes. It is more calming to the eye this way. I did also use four different fonts, warning was bold and easy to read using font Chunky Five, heavy breathing and snoring were the same and in a fun font called Laughing Gull to convey humor, Fluffy was in Sketch Block font which is bigger because she was the main reason for the sign in the first place and the other words are all in black and in my favorite font Shadows into Light Two. I like to use a bolder font mixed with a cursive type font to show definition between the words and they normally play well together. Plus cursive types of fonts can normally be closer to big bold fonts to soften them up. Remember to play around with the word placements to make them appealing. Every once in awhile step back to see if there are any weird spaces that need to be filled. Sometimes just moving the word around a little will solve this issue.

When you like what you have come up with, save it to your computer and print it out! I just cropped mine to a 5X7 size because I knew I had an old frame laying around the house that would work. I really didn't want to spend money on a little sign like this. So look around your house for an old frame and crop your design to fit the frame, making it a FREE PROJECT!

I am totally in love with my new bathroom and in love with PicMonkey. Be sure to try it out and make fun and easy decorations for your home too!

This post contains affiliate links, which means I receive compensation is you make a purchase using my links.