During my kids Halloween party, I ended up sticking them all into the basement. I can shut the door and not hear their blaring music, the kids like some privacy and I can set up the decorations a week before without having to keep looking at them.

There is one bathroom in the basement, and it is a 3/4 bath, not real big. Because the space is smaller, it is perfect to turn it into a black light room. I changed the four bulbs in the bathroom to CFL black lights, and went to town.

I did a little online research and discovered that you can spray paint anything with florescent paint, and it will glow. Also learned that Tide laundry soap glows too! Wow, my mind went crazy thinking about all that information.

I had six elements in the bathroom, and I might add, the teenagers all loved it. My thought, at some point, you will have to use the bathroom, so why not make it fun. 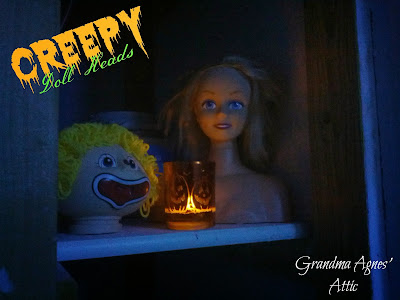 First element (not black light related): Creepy Doll Heads
If you have seen the tutorial on Pinterest about turning the old hair styling doll heads into creepy doll heads, this is where it will be heading next year, simply ran out of time. I took the hair styling doll head and a creepy clown doll head I thrifted, and just set them on the shelf with a small battery operated candle in front of it. It made the heads glow, and gave one point in the room where there was no black light. It is a simple display and easy to achieve, and takes you by shock. Only one of the girls screamed when she saw it. It works great if you have people who are afraid of either dolls or clowns. If you get both...score! 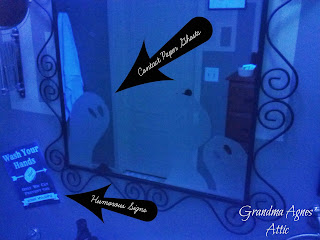 Second Element (not black light related): Clear Contact Paper Ghosts on the Mirror
This is another idea I learned from Pinterest. Very little effort and interesting effect. Clear contact paper, cut from the edge or corner, into the shapes of ghosts. I did this in the bathroom and the entry way mirror upstairs too. I cut three ghosts, two for the corners and put a single ghost in the middle. Cutting eye holes give them the actual ghost look.

Everybody seemed to touch the ghosts as they walked by or looked into the mirror. They all asked how I was able to achieve the look of a ghost in the mirror.  This could work on windows, and maybe even walls without a strong appearance. I will be using this trick again. Might try to make snowflakes for the mirrors over the Christmas holiday too.

Third Element: Random Halloween Painted Items
ANYTHING can be painted with florescent spray paint and made to glow under a black light. I had seen florescent spray paint in the stores for years, and never quite knew what people used it for. Well I know now and bought three cans of it. Take any item you want to glow, I used a paper mache skull, and spray paint it completely. I am thinking if you find thrifted items paint them white first, then florescent paint them, it would be great too. Think skeletons, skulls, pumpkins, haunted houses, bats, spiders. All that stuff that people donate because it has a crack in it, spray paint it and nobody will ever see it! I now need to rethink my thrifting before Halloween just for the bathroom.

Fourth Element: Handouts in the Bathroom 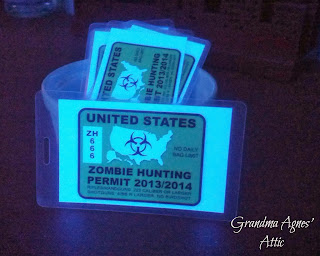 Thanks to learning how to use the new laminating machine (read about it here) I had the idea of Zombie Hunting Permits. Now because these are teenagers that were at this party, I thought leaving them out in the open, the kids might be too embarrassed to take them. I laminated up some zombie hunting permits that I again Googled and printed on cardstock. I put them into a simple bowl on the cabinet in the bathroom. My thought was that if they are in the bathroom alone, they might not feel weird taking one as a souvenir of the party. There was nothing on the back of them, so nobody would ever know where they got them from. I made up 20 of the cards, and by the end of the night, there were only 4 left. There is no way anybody missed these, because they glowed really brightly. So I am guessing that the kids knew to help themselves and will have something funny to keep in their wallets. If you are Googling these, some have specific state permits too, my state only had expired ones, so we used USA ones. There are also many other countries too. Thank you to who ever takes the time to make these up and share with the rest of us.

Fifth Element: Glowing Faces on the Ceiling
Just like above, if you spray paint anything with florescent paint, it will glow. I picked up these six plain paper masks at Michael's for just $2.00 in the kids crafting area. They are a cheap card stock and I wasn't sure how the paper would take the spray paint, but it worked just fine.  I used strait pins in the holes where the elastic should be strung through, and stuck them right into the ceiling. It is a low ceiling in the bathroom, so I didn't stick the pins all the way in. That way I could bend them out a little bit. 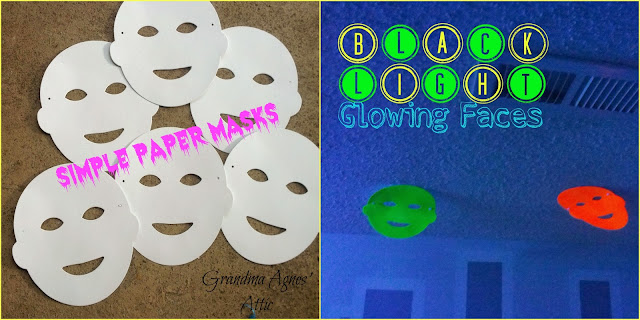 and the Sixth Element: Glowing, Dripping Hand Prints in the Shower
By far, this was my favorite element. Thanks to another great person online, I learned that Tide laundry detergent glows under a black light. He was using it to paint pictures, because mine was in a bathroom, I figured inside the shower was an easy clean up. I bought a 99 cent trial sample of Tide at Target and got to work. About two hours before the party was starting, I stepped into the shower (barefoot). Opened the Tide and dumped a little into my palm. Squishing it around a little I made a handprint above the privacy part of the shower glass. Then flicked my hands around to make blood splatter marks. On the bottom of the glass I ended up writing "Help me" backwards. More splatters and I was finished. Having my daughter on the outside of the shower helped, telling me where more was needed or which letter didn't glow enough. Great fun, and great impact for under a dollar! The next morning, before taking her shower, she just used the shower wand and washed all the Tide off the walls and door and right down the drain. And her shower smelled nice and clean too! I will TOTALLY be doing this again next year.

The bathroom was one of my favorite rooms this Halloween, too bad the basement as a whole is to large to make all black light. But maybe just having the bathroom makes it a little more special.


Check out my other Halloween ideas here.