I had seen a picture on one of my friends Facebook pages about individual pumpkin pies...hmmm. Sounds yummy, I had to try them.

My daughter's 16th birthday party was coming up, and she doesn't eat cake.  Actually, most of the women in our family don't like cake, so we try to come up with different ideas for birthday desserts. Her favorite is pumpkin pie. So this was the perfect opportunity to try out this idea I had seen. 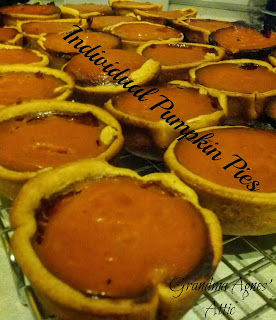 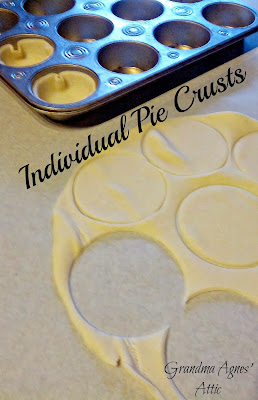 Disclaimer: Have to admit, I used a cheating way to produce these. I used pre-made pie crusts and pre-canned pumpkin.

Start by rolling out the pie crusts. I placed mine on wax paper so they wouldn't stick to the countertop. I used a drinking glass to make the circles. Just cut them out like you would a sugar cookie. You can also use a cookie cutter if you have a round one, or round with scalloped edges. Then place each cut circle into a pre-sprayed muffin tin. Take your time to gently push them down into the tin and make the sides fold back to the tin as best you can. You want to make the largest opening you can for the filling.

In a bowl, I used the pie recipe on the side of the pumpkin can. Basically all I needed to add to the large can of pumpkin was two eggs and one can on evaporated milk. Stir the mixture well and carefully pour them into the pie crusts. When filling the crusts, go slow! They fill up quickly and are quick to over flow. When mixing your filling, be sure to check with your can of pumpkin to make sure you are adding everything that it needs. Not every can of pumpkin is the same, some require spices to be added too.

These take forever to bake, so either make them the day before or earlier in the day. Mine took about two hours to bake and cool before the kids could eat them. Again, follow the directions on the side of your can of pumpkin. But because these are smaller, be sure to check them regularly so they don't burn.

Once they are baked, they easily pop out of the muffin tins. I placed them on a cooling rack before popping them into the refrigerator to cool down.They can be easily stacked in a plastic container in the refrigerator until they are ready to be eaten.

When they are ready to be devoured, put a small squirt of canned whipped topping on the top of each one before serving. 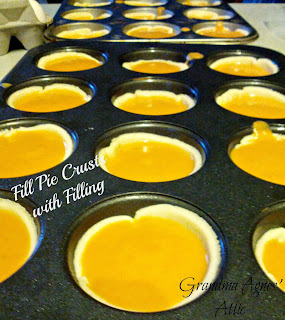 What would I change: I thought the pie crust to filling ratio was way off, and everybody else agreed too. I would roll the pie crust a little thinner before cutting the circles next time. That way the pie crust won't be so thick. I like the pumpkin to be the main taste, not the crust.

I would also not decide to make these as the guests were showing up. I had to work the day of the party, so these were started around 5:00. They were finally cooled and ready to eat around 8:00. I would just give myself more time.

I would also add a little more pumpkin spice to the mixture. It was quite bland, and I like it to have a real pumpkin kick. But that may be just me.


Overall, I really liked this idea, and thinking it could be changed up for any pie fillings as long as the crust isn't too overwhelming. Just think, individual cherry pies, cheesecakes, key lime pies...great, now I am hungry again.

Check out my other Halloween ideas here.