We have lived in corner houses before, but have never been designated as the school bus stop corner before. I am one of those parents that takes tons of pictures on the first day of school, so having the bus stop in my yard, I took this very seriously. It took a whole year, but we have finally completed the corner of the yard (bus stop) make-over.

I didn't take any "before pictures" because I knew I had one of my Elementary aged kid from the first day of school. The middle school and high school kids wouldn't let me anywhere near the corner... 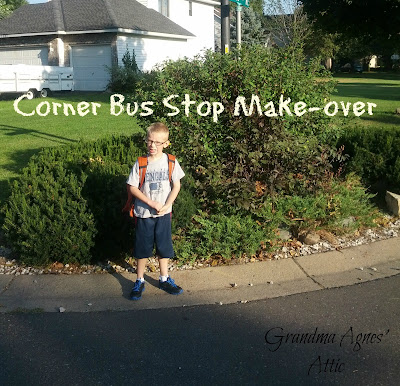 It was a pretty standard corner of our lot. Black plastic edging between the lawn and landscaping rock. Large shrub in the middle, two lower shrubs on each side and green filler everywhere else. So why change it?

#1 This corner collects every piece of garbage that is blowing down the road.

#2 This corner collects every leaf that the neighbors didn't rake up last fall.

#3 The shrubs are too large for a corner and cars can't see around them to make a safe turn.

#4 I hate landscape rocks and shrubs that don't flower. It looked like a hot mess.

#5 I couldn't watch the older kids out the bedroom window in the mornings to make sure they didn't get kidnapped. They knew just where to stand behind the big shrub so that I couldn't see them.

#6 It is boring and just plain ugly.

So where to start with a project like this? I paid the older boy to start cutting down everything green that he saw on the corner. He set out with a lopper and had fun completely destroying everything in his way. He also moved the large rocks out of the way to use later. There were about six large rocks hiding under the low shrubs that we didn't even know were there. 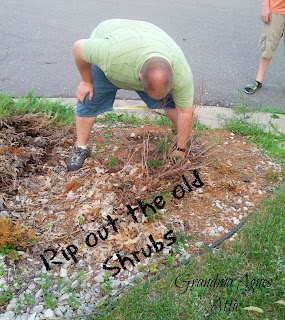 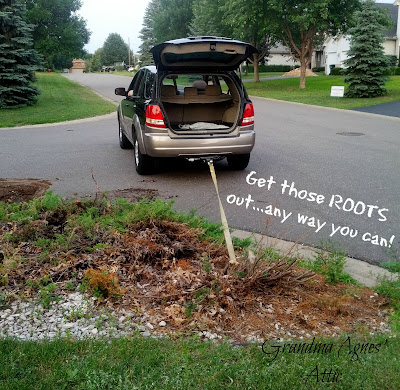 After the tops of the shrubs are gone, the real work begins. You need to remove the roots. My silly husband didn't think this would be a big job. He ended up using a truck, tow rope and a large chain with a hook to finally get those roots out of the ground. The neighbors found us quite entertaining that evening! After about two hours, we had successfully removed the large portions of about five shrubs. We didn't know how many of the low shrubs there were as they all grew together. Without the truck, we would have never been able to get them out. If you don't have a truck, find a friend that does and likes to destroy things. Men tend to like these kinds of jobs...

Did you think the hard work was over once the roots were gone? Sorry, nope. If you have landscaping rock, you have quite a bit of raking and shoveling ahead of you now.

This turned out to be a full weekend, whole family project. And the title doesn't lie, it is the worst job ever. The easiest way we found to tackle this part of the project was to rake the rocks into the road, and then shovel them into a wheelbarrow and haul them into the back yard (behind the shed to be used later). The first few passes weren't to get every rock, just to get the bulk of them out. Myself and the little guy were in charge of ripping up old, rotting plastic from under the rocks, and then to hand pull the roots that were sticking out. Those shrubs had to have been there a long time as I have never seen so many roots, we will never get rid of all of them. Hubby and the older boy raked and shoveled as the girl made the wheelbarrow trips to the opposite end of the yard. This corner didn't seem so big when we started, looking at the rocks, it now looked huge!

After the rock removal, we took the week off. At this point we were on weekend number four, and I was tired of it. But I hated looking at the mess every night coming home from work too. I was hoping just one more weekend left to finish it off.

Also at this point, the project has cost us ZERO dollars, except for what I paid my son. We had pulled up old brick from around another project, that you can read about here. These bricks were perfect for this job. After deciding the direction that the  corner was going to take, hubby laid bricks in the same way as a retaining wall, like this project. The only difference was that he used Liquid Nails to hold the layers together because they didn't have the build in lip like retaining wall block has. 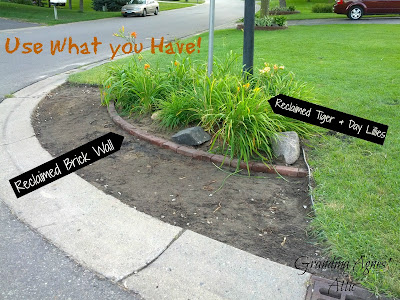 After he finished the short wall, the girl and I got to work planting. I love the nursery as much as the next person, but I didn't want to buy any more plants. I have plans for a garden next year by our deck, and it is covered in perennials right now that will have to be moved anyways once the garden comes. So I decided to turn this corner into a lily bed. I have ton's of lilies in the backyard that need to move, so this was the perfect solution. It also worked for the stipulations that every good bus stop should have, fall color for pictures, and flowers that don't attract to many bees!

We placed the bright orange, tall Tiger Lilly in the back of the bed. Shorter peach Tiger Lilly went in front of those, and bushy yellow day lillies took up the space in the front. I am hoping when they fill in, there will be a gradation of color and size. I put the shorter plants to the front of the bus stop, so that every bodies pictures will hopefully look nice for years to come too.

The giant dirt area in front of the bricks are my sore spot for this project. This is the only part of the job that required purchasing anything. We hauled in 12 bags of black dirt and one big bag of grass seed. Plopped it all down and were quite happy. I watered it at least twice a day, and nothing happened. Minnesota was in the middle of a drought and heat wave. Seriously? The one time I plant grass seed the weather doesn't cooperate with me.  I planted the grass seed four weeks before the first day of school thinking it would be nice and lush by then. Nope. First day of school looked like this. Patchy grass coming in and weeds loving the black dirt. That old saying about watching the grass grow kept running through my head. 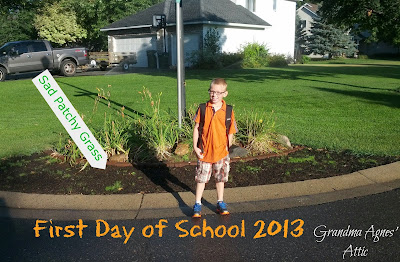 Now some of you may find this a silly project, but it accomplishes two things for me. #1 I won't have blowing garbage as bad as we did before, it was a real eye sore, and the corner will be safer for turning cars. And #2 not only my kids, but neighborhood kids in years to come will have a nice backdrop in their First Day of School pictures. Just think 20 years from now when they look back at that picture, I want it to look nice for them, and not overgrown shrubs with garbage under them.

So you may be asking what does it look like when all the grass has grown in and is finally complete? Well I am still waiting for that stupid grass to finish growing in. Once it is complete, hopefully before the snow starts, I will take a picture and update it here. Otherwise you may have to wait until after the spring of 2014 to see the final pictures. But rest assured, there will be a final picture at some point.