Dance Team at our house has started. Yes, practices started just one week after summer vacation started. The girl is very excited as this year she is no longer a "Rookie" but a full fledged Sophomore!

I managed to somehow get roped into being the secretary for the Boosters this year, the coach knows that flattery will get her far with me. A little flattery and I was agreeing to this new job. I am also the chair of the Hype committee this year. Hype? It is a group of women that get together to make little gifts for each member of the team to give to them before big games, shows, camps and hopefully state. They aren't big expensive gifts, but items they can use, eat or display their team name on.

After figuring out which events we will be covering this year, and doing the budget, I realized that the first event snuck up on me really fast. By the coaches request, she wanted some sort of socks for the first event - the parade. 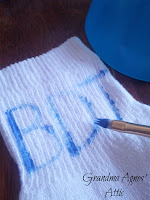 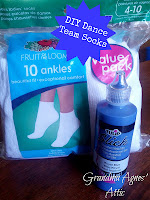 I got a few quotes of local screen printing businesses, and they wanted between $5 and $8 PER PAIR! That would not work into my budget at all! So at the booster meeting I took a few minutes to get ideas from the head coach. She had said in the past people have just used puffy paint. I was thinking that or sewing tiny blue bows to the sides too. At the time puffy paint sounded easier, now that they are done, I think they would both be very time consuming. I used plain old Fruit of the Loom white ankle socks that I picked up at Wal-Mart. I started with a sample pair, lightly painting BDT (their team initials) on a sock to check out spacing. Once I got it right, I painted it darker and filled it all in. They are very simple once you get the spacing correct. I only did the outside of each sock, and it was still double the number of girls as each girl needs two socks. Doing both sides would have been four times the painting...no no thank you. 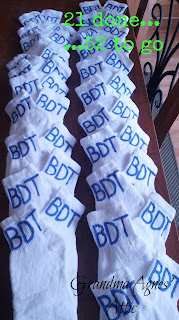 I am one of those types of people who think about the gift wrapping when giving a gift to somebody. Why just wrap it in a Target bag, put some thought into it and make the gift wrapping pretty too. Well Hype gifts need to have a tag to go with each gift. So I tend to go overboard with the tags also, just like wrapping papers. 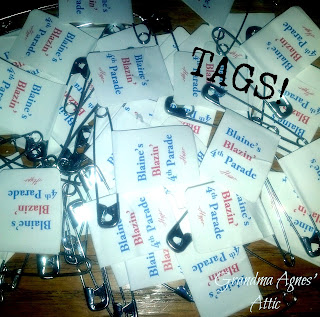 I knew I wanted to use safety pins to hold the sock together, so I just needed a tag to go with safety pins. Original idea was two labels folded over the pin stating the event on one tag and the saying on the other tag, off the circle in the pin two mini yarn poms in their silver and blue. So I started wrapping yarn around a fork to make the mini poms, cut them and was not happy with how they looked on the pins. I am still planning on using them on another tag, just not this one. And the labels...well I bought 2 inch pins thinking I could use two 1 inch address labels...well 2 inches is form the very end of the fasteners not the pin itself.  So the two labels got cut down to just one label. 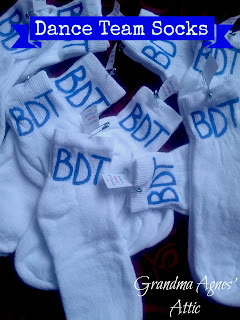 I sat at my son's baseball game sticking labels onto safety pins. Other mom's were watching me trying to figure out what the heck I was doing. Told them dance started already, and they all went Ohhhh. My daughter normally tags along at baseball games, so they knew what I was talking about.

So for my first Hype gift of the new 2013-2014 dancing year, I had high hopes and dreams, and then brought them back down to reality to come up with these. --->

I had budgeted myself $3.50 per girl thinking they would be more expensive. Because I made them myself, they only ended up costing $1.27 per girl and I have a few extra socks in case somebody loses theirs (but don't tell the girls that). 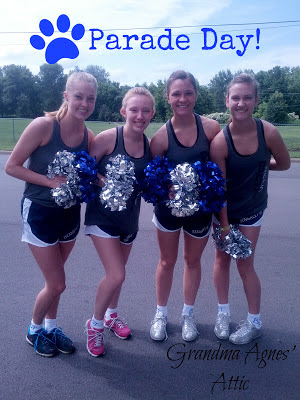 I only used one bottle of puffy paint, so either something else this year will require puffy paint, or at least something in the next two years will. The yarn will be used on a future gift, but were charged to this one. The labels I already had at home, so they cost nothing and only used three sheets.

I think they turned out good, and I have learned to look at the dates of each event a little further out so I am not rushing through them. Our next gift is for a camp they will be attending, a friend is doing Survival Bags with all the little stuff they may need for camp and I am doing a screen printed tank top for them to wear at camp. I will not be making them myself, but rather hiring a company to do those. Post will follow on how the camp Hype gifts turned out. 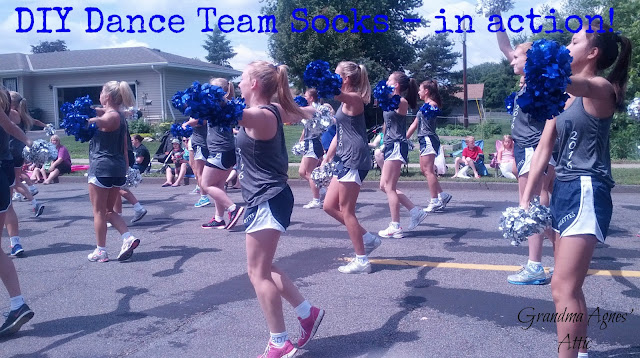