Summer Bucket List - Things the Kids MUST do this Summer 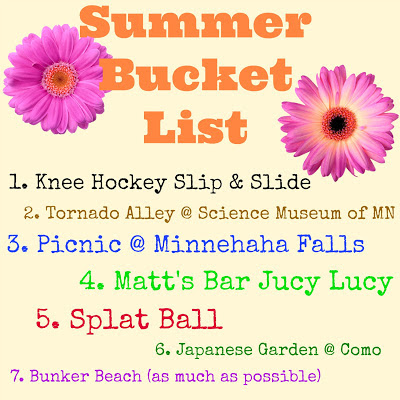 At the beginning of summer vacation I challenged each member of the family to come up with one Summer Bucket List item that we could all do as a family.

There were a few rules:

The girl wanted to go to Duluth MN for the weekend. Looking at our schedule, there was no way to make that happen. Even camping up there, we didn't have a free weekend this summer to spare. So she changed hers to going to Bunker Beach as much as possible all summer long. Well her and her friends bought summer passes and so far have been there twice. Which is alot because of all the cold weather we have been having. The whole family will participate at least once this summer by going with her. The girls was set: Go to Bunker Beach as much as possible.

The older boy has always wanted to play splat ball. He is into all the video games where you and your friends kill everything in site. So he is thinking it is like that. He will be surprised when he realizes that those little pellets of paint hurt! We are thinking of bringing along some of his friends to get a bigger group going. I said I will gladly supervise and not participate, and I am assuming the little guy may be to young to play at all. But his is set: Go Splat Balling.

The little guy had just finished watching the news with us where they were revealing the best place to get a hamburger in the Twin Cities. Hubby & I knew the best hamburger before they even showed the teaser...Matt's Bar - Jucy Lucy. Hands down the best of the Twin Cities for sure. My brother used to live close to Matt's Bar, so we have been there before, but it had been almost 15 years ago. I will sacrifice and go back to teach the kids about the first (and best) Jucy Lucy hamburger. Little guy set: Matt's Bar-Jucy Lucy.

Now for some extras. Every other year I have taken the kids to Como Zoo & Conservatory to visit the animals and look at the cool plants. Behind the Conservatory they have a Japanese Garden. It is my favorite "Zen" place. It is calm, quiet and very relaxing. We started taking pictures of the three kids walking up one of the paths, every other year we recreate that picture to see how much they have grown. Well this year we need to take another picture. Plus they just opened the new gorilla exhibit which is the largest netting enclosed Gorilla exhibit in the US, did I also mention the Zoo is free! Extra item: Como Zoo and Conservatory Japanese Gardens.

And then there had to be an item to keep the kids busy during the summer when we are at work. Something that the boys wanted to do last summer, but we ran out of time. Knee Hockey Slip & Slide. In our old neighborhood the neighbors across the street would set up a "redneck" slip and slide whenever it got hot outside and everybody needed to cool off. It was a huge piece of plastic going down their front hill with a hose at the top. The kids had so much fun with them, and we really missed playing with them on it. We had seen the same concept except on a flat piece of grass and hockey goals on each end. Something the kids can do all summer long was set: Knee Hockey Slip and Slide.

So far we have been able to accomplish two of these Bucket List items already and I will be posting about them soon. Have you made a Summer Bucket List? What is on your list of must do's? Please comment below to share your great ideas with others. We Mom's are always looking for fun ideas to do with the kids.