Once again, we still have not seen Spring here in Minnesota, and with last weekend being the "Unofficial" starting weekend of summer, this weather is starting to get to me.

Our Memorial weekend plans took a turn with the weather up north. We were planning on spending the weekend at my folks cabin up north, but with a full weekend of rain in the forecast, that would have been alot of indoor time when all you want to do is be outside.

The Hubby had to work until 5:00 on Saturday, so the kids and I ended up cleaning up the whole house Saturday morning to make it so we didn't have to continually clean throughout the weekend. By the time he got home from work, we were raring to go! 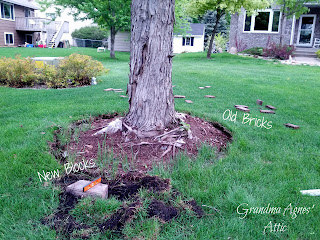 Saturday night consisted of BBQing and planning the rest of the weekend out. That way when Sunday morning came we could put our new weekend plans into play. We ended up planning on a new retaining wall around the front maple tree that was heaving out of the ground. We figure the tree was probably planted when the house was built 20 years ago as our city has a rule of each house having to plant two front yard trees the first year the house is built. This tree had so many exposed roots and plastic from past landscaping shredding around the base of it. It looked sad.

We have been looking around at home improvement stores for the kind of block that we were going to use at this house, and after "pre-shopping" for block Saturday night, we think we have agreed on one. We are going with Home Depot's 4" Flagstone in Autumn Gold. They were on sale which helped in the choosing also. We both agreed that we liked the Flagstone look, we just couldn't agree on a color. We both are partial to black mulch, so it had to go look nice with black.

So Sunday morning we headed up the road to Home Depot in the pick-up truck to get our block. We loaded up 40 blocks thinking that was enough blocks (haha). While going into the garden department, hubby was joking with me to jump on the cart. So trying to have some fun I did. Now I have problems getting onto escalators, I can't judge the movements of them. I somehow managed to get onto the cart just fine, laughing through the parking lot. But when I went to jump off, I cracked my knee, hard, on the handle. Still smiling, crying on the inside, telling him "I hit my knee real hard!" We loaded up the 40 blocks as I limped through the garden center, then as we paid and were loading them into the truck, I was twisting weird and ended up pulling a muscle in my chest. Seriously, this was not the way to start a new project.

Once we got home, we pulled the truck up to the tree and started unloading some of the blocks. Hubby started with the shovels to level out the spot for the first block. Now you know when your husband is really good at something, you kind of sit back and just let him do it...well retaining walls are one of those things that my husband is really good at. He is exact about his blocks being level and straight, he is quite the perfectionist about them. I don't mind, because they look great when he is done with them. I get him tools, drinks, snacks and hopefully offer great conversations along the way. This year was also a little different as the oldest boy is now 14 and stronger, he actually jumped in and offered to help! I told him that this will be a great skill to learn for when he gets his first house. He enjoyed his time with Dad, and enjoyed using the hatchet to pull the sod out from around the tree base.

So now fast forward to Sunday evening, right around dinner time, the last block went into the wall. The guys were so proud of themselves, it looked SO good. Because it was only 60 degrees the whole day, we ended up cooking and eating inside to heat the house up a little bit, but we sat at the kitchen table with the front door open so we could look at the new wall. 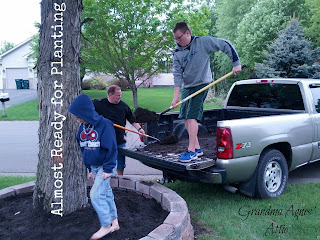 Monday morning came with some aches and pains that the ibuprofen hadn't taken care of yet. We were on a mission to get a scoop of black dirt, and a few perennials to fill the space now.  I have an abundance of Hostas in the backyard that need to be split and replanted, so I needed something to match with them. So into the pickup truck we went again to the nursery this time. At the first nursery we ended up with two white Astibules and no black dirt as they had run out. At the second nursery we got a scoop of black dirt for only $16. Back home it was again nice to just pull up to the tree and start shoveling the dirt into the new wall. While the guys were shoveling, the girl and I were in the backyard digging up the biggest hosta to split. We got 4 cuttings out of one plant and really could have split it more. The guys were done, and here came the new plants. Two hostas and one Astibule on each side of the tree. Then came two big rocks from around the rest of the yard, the girl gnome and three solar lights. I spent alot of time across the street on the neighbors curb to get everything placed just right. Looking at the placement, going back to move something, walking back to look again, going back to the tree to move something else, back and forth until I liked the arrangement of everything. 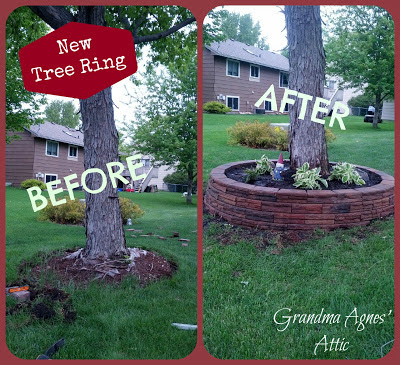 Looks nice right, but it still really isn't finished quite yet. We are planning on adding cap stones to the wall to finish it off and I still need mulch. We are debating between regular wood black mulch or recycled tire rubber black mulch. I am also looking at another different variety of hosta I have in the backyard that I might add two more into the bed to fill it in faster. This fall I am planning on planting many spring bulbs into the corners to get some much needed color in the spring. I love crocus, hyacinths and daffodils. Now I can't wait until fall, but I need spring and summer to arrive first.

I find myself staring at the wall all the time now. I like the look of the Flagstone and am happy with that decision. We are planning on the next tree already that is on the other side of the driveway. We are going to match it to the first tree. It isn't heaving out of the ground, so it should be an easier, and shorter wall. And after that, there are only two more mature maple trees that will need rings around them. Easy peasy right?

UPDATE: There have been quite a few negative comments left on both this post and on Pinterest that I am killing this tree by covering the bark with soil and mulch. I have to let you know WE DID NOT COVER THE TREE OR BARK WITH SOIL! The picture is quite deceiving,  we put soil up to the base of the bark, but not onto the bark to suffocate the tree. We have made walls just like this on numerous trees at other houses we have lived at, and they are thriving 12+ years later. Yes, a retaining wall would have been better planned when the tree was originally planted, but it was not. We knew how far out around the trunk to go so as not to disturb the tree or it's roots. If you are planning on a project like this and are not sure how to proceed, please seek the advice of a local arborist in your area.

By the way, three years since this project took place in our yard now, and the tree is still thriving!
Email ThisBlogThis!Share to TwitterShare to FacebookShare to Pinterest
Labels: DIY, Fixing up the House, Holidays, Homesteading, Marriage, Saving Money

New comments are not allowed.