I think I can count on one hand the number of times I have been alone in my house since 1997 (That doesn't include sick days home from work). This past weekend I had that rare opportunity to have an entire Saturday alone in the house. The older kids were at an all day religion retreat, hubby was at work, and he said he would take the little guy to work with him! 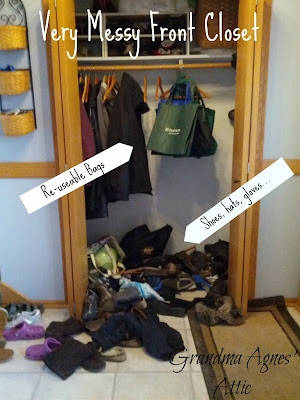 I knew what had to be done...this is seriously what my front closet looked like that Saturday morning after everybody left!

There were so many shoes, winter hats, gloves, and bags of crap that I couldn't even shut the door anymore. It was so bad that most of us hung our jackets over the railing in the kitchen or stairway rather than have to try to struggle hanging them up in this closet. And forget trying to find that one pair of shoes that you are looking for before heading out the door. It had to change, and this was the day. 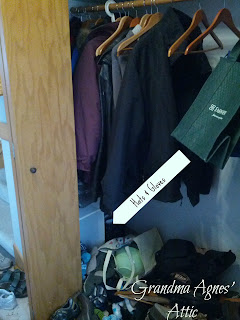 The left side of the closet held a three shelf white wooden system that only two of the shelves were big enough to put anything on. They were meant to hold winter hats and gloves, but because there was no basket, they all just fell out and onto the floor. Again, forget trying to find a pair of matching gloves... 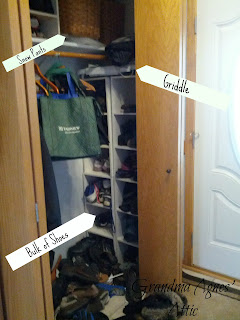 The right side was meant to hold all the families shoes. Everybody had two cubbies in the white wooden shelf system. Well with two ladies in the house that both have shoe addictions, we took over most of the cubbies, the floor, and the top shelves too. Snow pants are a problem in the closet too. We have to have them accessible at least six months out of the year, and they never end up folded up and back in their spots. And for some reason the pancake griddle made it's way into this closet too, because it is a large one and will not fit into any cupboard in the kitchen. Side note: it is still looking for a permanent home somewhere in the house. 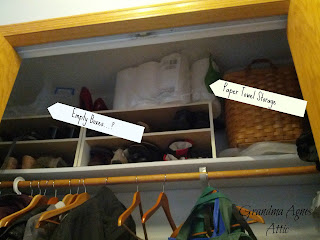 Oh the dreaded top shelf in the front closet. Really, what do you put up there? Nothing that you want to get to on a regular schedule. Ours housed paper towels, snow pants, my shoes and for some reason, empty plastic boxes. 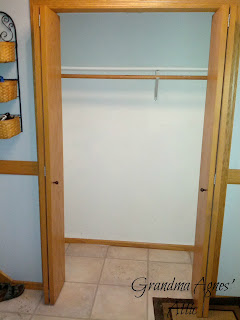 The first step in this process is obvious, clean out that closet! So I brought up a large folding table into the front room and set out each person's shoes to go through. Starting with Ali as she has the most. I put them onto the table in "garage sale" fashion and made sure they each had a match. If there was no match, into the donate pile it went. I made her really look at them and decide if she was ever going to wear them again. She ended up filling a tall kitchen garbage bag to donate. It also helped that she got rid of her rain boots. 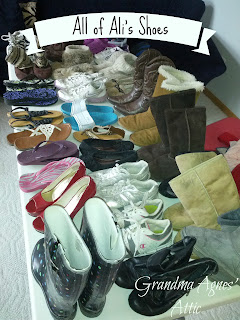 I then went through each member of the families shoes to do the same thing. The little guy had tons of shoes that no longer fit him, so did the older boy who is now in a 10 1/2 shoe size! My husband realized that he had too many black dress shoes, so he put some upstairs into storage to pull out once the other pairs wear out. I also got rid of quite a few pairs of shoes. I had to think logically if I was ever really going to wear heels again. I am no Beyonce, so donation pile they went. Two bags full of shoes were donated! Then I tackled the jackets, hats, gloves and snow pants. Donated anything that no longer fit, or didn't have it's match. Another bag out of the house!

I had made it to Menard's that morning after dropping the older kids off at church. I picked up another square shelving unit, a long horizontal shelving unit, a hook system and a large basket. I had measured the entire closet, side to side and taking into account what I already had, and bought enough to fill in the gaps. So while the paint was drying, I started assembling the new shelves. 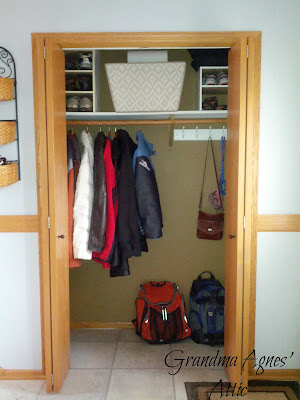 Here is what I ended up with! It is super silly, but I find myself opening the doors and just standing there staring at it. When Hubby and the little guy got home from work, I was like a little kid on Christmas morning. I ran to the closet to show them all the different aspects of the new closet. Showed the little guy where to now put his shoes, jacket and backpack. Hubby liked everything about it. The only thing left to really finish off the closet is new flooring, turning the bi-folds into French doors and painting the doors and molding white. But I can live with that for awhile.

Here, lets take a tour of the new closet... 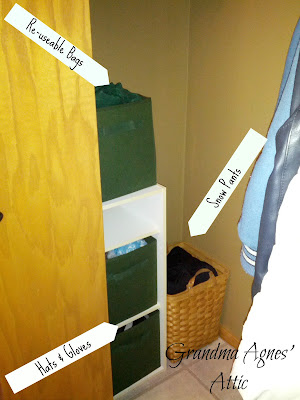 Left side of the closet, still has the three shelf unit, but now has green baskets to actually hold the gloves and hats. A third bag on top of the unit holds the re-uesable bags. For the record, I will never get re-useable bags that don't fold and button shut again! They are so much easier to store when they close up securely. The basket from the top shelf now holds the kids snow pants. And each kid now only has ONE pair of snow pants that actually fit them. 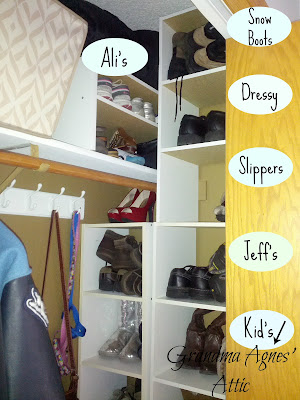 Right side of the closet now actually holds most of the shoes for the whole family. There is now the extra unit on top that was just wasted space before. So there are five units total in our system. The girl and I are on the top shelf for most of our shoes, so all the men in the family get this side of the closet. You can also see the hook system that I bought to hold purses, dog leaches and the occasional light backpack. This was a great measurement to take that morning, because I knew I had 19 inches to play with, and I found an 18 inch hook system that will match the woodwork once it is painted. 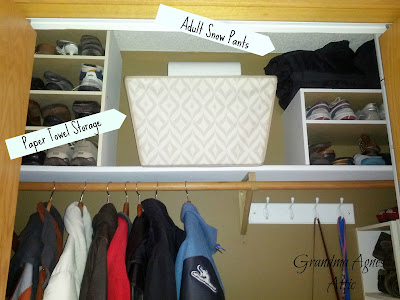 And here is the dreaded top shelf in the closet. There is now a third horizontal shelving system on the right side to hold even more shoes. And a beautiful basket that I purchased at Menard's for $19.99. My hubby thought is was completely silly to have a basket just to hold the extra paper towels, but to me, it is the prettiest part of my new closet. I am not crazy about the folded adult snow pants on the top shelf, but I had no place else to put them. They don't get used as much as the kids pairs do, but I like to have them all together so I know where they are.

So here is the big before & after. I think it is like one million times better. It was nice to have the whole day to myself to get another icky job like this done. Plus it is nice to have people appreciate it when they come home. Side note: it has been 6 days and it is still clean!!! 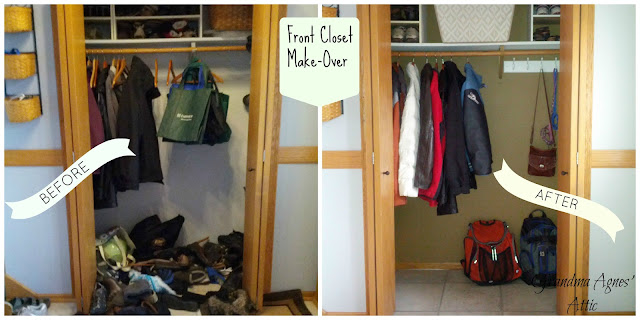 Email ThisBlogThis!Share to TwitterShare to FacebookShare to Pinterest
Labels: Fixing up the House, Saving Money