I have been a member with the web site Houseparty.com for almost three years now, and this past December I finally was selected to host a House Party!

Our family was selected to host a Hasbro Game Night. You know like the ones you see on the commercials with Neil Patrick Harris. Houseparty.com mailed out a pack of goodies that contained:

And all I had to do was agree to host a party for at least 10 people on New Years!


As you may know, I have two teenagers and one tween, and I want to keep them safe on New Years. I don't want them out driving around and don't want them drinking, obviously. So I agreed to have their friends come over to spend the night and have some fun. We did have the girls downstairs and the boys upstairs, and everybody gets along, so the night went great. 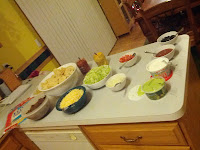 The kids all started off the evening around 7:00 with pool and music in the basement. They were screaming and dancing, jumping around and being crazy. We have an old wine cabinet in the basement that we have filled with 2 liters of pop, and they broke into them and the "kid champagne" as they called it. 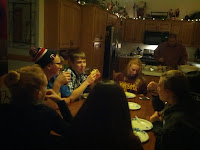 My husband and I were upstairs making food for all the hungry teens. We ended up with a make-your-own taco bar. Nothing fancy, just the basics. The kids had been on Twitter and Instagram all night, and I was following along with their pictures and conversations upstairs. So when the food was ready, I "Instagramed" them a picture of the food. They caught the message and came screaming upstairs. My daughter and her best guy friend ended up in a taco eating contest. They were the big, burrito sized tortillas too! I think he won with 5 tacos and she only finished off 4 of them. Needless to say, those two were not hungry the rest of the night. 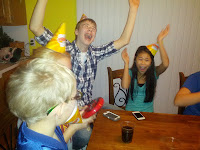 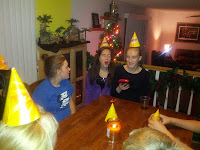 After laughing and sharing stories over dinner, they broke out the board games. They started with Catchphrase. We have owned this game in the past and it is always a good crowd game. Sadly, that game only kept their attention for about 30 minutes. So they grabbed the Twister box, and downstairs they headed again. I took a few pictures of them having fun, but did not partake in the game itself. It has new items on the spinner board now too that I didn't know about. So the folks at Hasbro have updated Twister if you didn't know. The kids all ended up playing Twister for a few hours, until it was almost midnight. 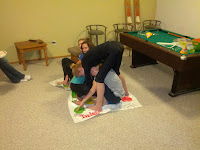 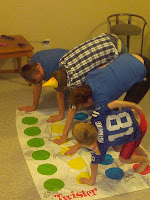 At this point my husband and I were watching a movie upstairs. We turned off the movie for about 5 minutes, watched Dick Clark's Rockin' New Years Eve countdown for the Central time zone, gave each other a quick kiss, and went back to our movie. The kids were again screaming and taking tons of pictures. They seemed to settle down around 1:00 when they turned on a movie. That was when girls started falling asleep, and we kicked the boys upstairs and we went to bed ourselves. 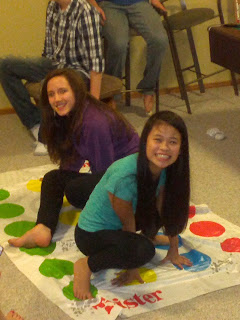 A successful New Years with the kids again. I think the whole secret to keeping kids safe and sober on New Year's is plenty of activities. We were lucky to have new board games, movies, music, pop and tons of food. The kids all like each other, so they entertained themselves without any drama. And I am sure tons of Twitter and Instagram pictures too!