This is part two to my previous post about personalized gifts for my daughters high school dance team. You can read the background and the first team gift in this posting.

My second Hype gift I was in charge of was just three weeks after my first gift, so I didn't have time to stop and smell any roses. I was gathering supplies for both gifts at the same time. The second gift was customized dance t-shirts for all the girls. I had my daughter and two of her friends at the computer with me while I was designing this shirt. It is different than a water bottle, this was something I was hoping they would wear in public, so it had to be done right. 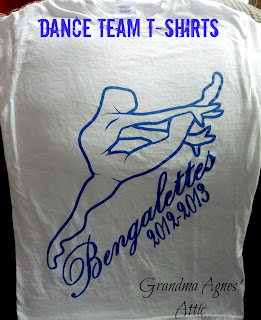 I had an idea of the design I wanted in my head, a leaping dancer, and my daughter wanted the font to be cursive. Which thinking about now if funny, if they stop teaching cursive writing in school, how will they be able to read t-shirts anymore???

I found a wonderful company at ooshirts that helped me plan out the whole design. I entered the sizes of the shirts that I needed, the color of the shirt (white was less, might do colors next year) and one screen ink color. Again, I was trying to keep within my budget and wanted to see how inexpensively I could pull this off. Ooshirts called me when they said my image was to pixelated and that I needed a new image. The guy helped me by emailing me some ideas of what he thought would be similar. After re-working my design we had one that was going to work. It was a simple design, but with it being only one color print, I thought it would look better that way. The shirts ended up only costing $3.55 each, again with free shipping and no set up costs. 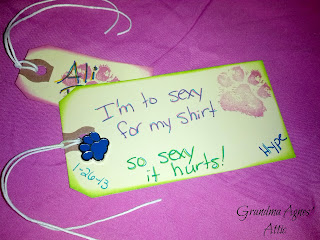 After ordering the shirts, I had to wait for them to be delivered, so I started on the tags. I needed one larger tag with the saying on it, and a smaller tag so that each girl knew which one was theirs by size. Again you can read about how I do the tags in this posting. I think I will do a video to show just the tags in a later posting. The smaller tags in this posting have the girls names on them, so doodle hearts have been placed over their names for privacy reasons.
The shirts were delivered in under two weeks which I thought was real fast and gave me enough time to finish assembling the entire gift. 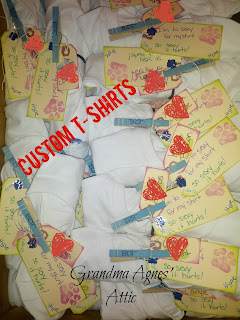 I also purchased a few extras for this gift just to make it different from the water bottles. I purchased small blue paw charms off of eBay. You can see them better in the picture above. They were from China, and I hope the girls aren't putting them in their mouths because I am not exactly sure what they are made out of. They ended up costing only 17 cents each and I think they added a bit of bling to the tags. I also bought clothes pins from Target, wiped them with my blue rubber stamp ink and wrote BDT (their team name) on the clothes pins after they dried. These pins were used to hold the tags to the shirts. They were clipped to a (brand new) hair pony. The hair pony held the rolled t-shirt in place. You can see the finished ones all rolled up in this picture to the right. I only took one picture, because after rolling 75 t-shirts I didn't want to look at them anymore :) The total t-shirt gift ended up only costing $3.76 after tags, paw charms, pins, ponies and the shirts themselves. Again way under budget!
What type of gifts have you done (or received) with your sports team? If you clicked here from Pinterest, I know you have tons if ideas...all the crafty people do.


I am linking this post to:
DIY Showoff
Thrifty Decor Chick