Remember back for a moment to high school...did you letter in high school? Do you remember how important it was to letter and receive that letterman patch? 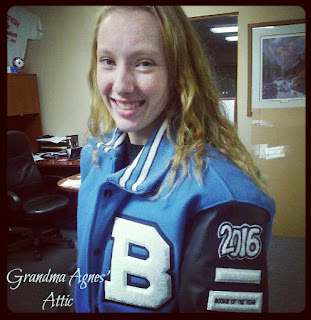 My oldest "lettered" her freshman year in the fall of 2012 for Dance Team. She has been dancing since she was 2, so I was thrilled for her to letter her first season in high school. I, on the other hand was not a dancer, but a cheerleader and did not letter until sophomore year. But I digress. Her grandparents purchased a letter jacket for her for Christmas. With the way her school does the jackets, they don't use the actual patch that you receive from your coaches because it is to large. I think it is also a ploy to get another $12 out of you for the smaller letter to actually be sewn to the jacket. But anyways, we needed to find a way to display the actual letter that she received. She wanted to just tack it to her cork board in her room, but you know how I am, it had to be something more! You only receive your first letter once in your life, so I wanted to have it displayed in her room.

We scoured stores for the perfect frame to hold it. I wanted to cover a mat with hot pink, to match her room. I was also hoping for a black or white frame to match her all pink room and not clash with the blue of her letter. We found a black frame at Michael's on sale for $19.99 and was 11 x 14 with a white mat inside that would fit the large patch with a little overhang. I was fine with it peeking out, it gave it more dimension that way. 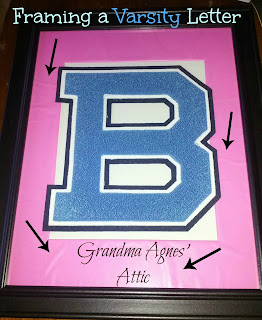 So with our newly purchased frame in hand we headed home to cover the mat and frame it. Here is where it went wrong...I thought I knew how to cover a mat board. Really, how hard can it be? I took a large section of pink wrapping paper, made the X in the middle to have it fold over and onto the back, trimmed the whole thing...and then sprayed it with adhesive. WRONG! Yes it would stick, but it would also be lumpy and wrinkled. It looked horrible. You can see under the B the wrinkles, it should have been smooth. With these wrinkles and bumps it was extremely noticeable and would not work for me. I tend to be a perfectionist when it comes to my crafts and decorating. And my daughter received those wonderful qualities from me too and is also a perfectionist. This would just not work... 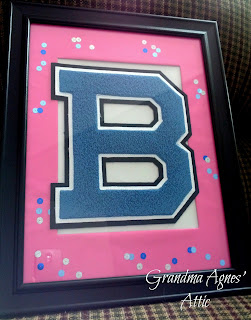 So we sat on it for a month or so. Never hung it up in her room because it made me mad that it looked like that. Then one day I read the post from Our Fifth House. I didn't need to use adhesive...just tape on the back! How stupid I felt. Really, it was behind glass, did I think that the paper was going to peel off? I had to super secure it in case of a Upper Midwest earthquake? I felt so stupid. But that feeling soon left when I was ripping the paper off of the mat. I then used the correct adhesive...tape. It looks so much better don't you think! Because I was so happy with how it turned out, we even blinged up the mat a little bit to make it pop. I used leftover sequins from years worth of old costumes that I still have.And look at that, it actually looks so much better. Notice the lack of wrinkles on it now. And I think the sequins give it just enough sparkle to make it look more special in her room. 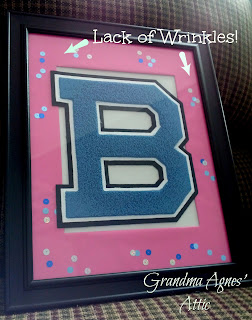 I will be posting about her whole room make-over at a later time. Can you believe there were no walls here before? It used to be part of the large "rec room" in the basement and hosted a pool table right where her bed is now. This bedroom was a great investment in the new house, as we went from a four bedroom house to a five bedroom house with a HUGE walk-in closet. I don't think she will ever move out now...
Linked this post to:
That DIY Party
Thrifty Decor Chick
Between Naps on the Porch
Nifty Thrifty Things
Mom 4 Real